Teaser Tuesdays is a weekly bookish meme, hosted by MizB of Should Be Reading. Anyone can play along! Just do the following:
*Grab your current read
*Open to a random page
*Share two (2) “teaser” sentences from somewhere on that page
BE CAREFUL NOT TO INCLUDE SPOILERS! (make sure that what you share doesn’t give too much away! You don’t want to ruin the book for others!)
*Share the title & author, too, so that other TT participants can add the book to their TBR Lists if they like your teasers!

From Never Less Than A Lady by Mary Jo Putney. 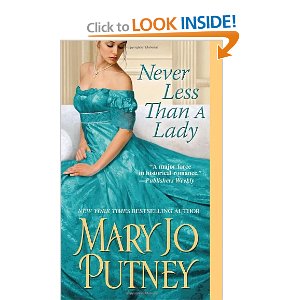 No matter. Though she was quite right to say he was insane to take on such a damaged bride, he had no regrets. (pg 51)

Back cover blurb-As the sole remaining heir to the Earl of Daventry, Alexander Randall knows his duty: find a wife and sire a son of his own. The perfect bride for a man in his position would be a biddable young girl of good breeding. But the woman who haunts his imagination is Julia Bancroft – a village midwife with a dark secret that thrusts her into Randall’s protection. Within the space of a day, Julia has been abducted by her first husband’s cronies, rescued, and proposed to by a man she scarcely knows. Stranger still is her urge to say yes. A union with Alexander Randall could benefit them both, but Julia doubts she can ever trust her heart again, or the fervent desire Randall ignites. Yet perhaps only a Lost Lord can show a woman like Julia everything a true marriage can be…