Yesterday, Seekerville’s guest was Love Inspired’s Associate Editor Emily Rodmell. The post centered around the Love Inspired Historical line, what kinds of books are out there and what editors are looking for. An opportunity was also given to pitch, which I took advantage of so,  prayers are appreciated.

In the course of yesterday’s conversation I remembered just how much I love reading LIH books. Yes, there are some that are difficult to read. I recall one that took me well over a month to read. I should have given up on it but my curiosity as to how the story would end got the best of me. Plus, as a writer interested in targeting LIH I wanted to know what exactly didn’t work for me. The problem with that particular book was a mega sagging middle. No, I won’t mention the name. 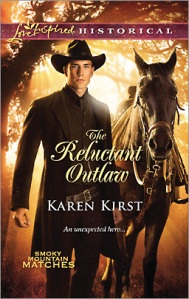 Then there are times, a lot of times, when I pick up a book and just can’t put it down.  Christine Johnson’s Soaring Home and Renee Ryan’s Dangerous Allies are two that come to mind. The there is Karen Kirst’s The Reluctant Outlaw, which released in September, but you can still purchase it through Love Inspired here. The three mentioned are all on my keeper shelf and each for their own reasons. Were they perfect, not completely. There were a few minor issues but I’m not one of those readers who throws a book away for a typo or for a tiny missing piece of the puzzle. These authors are also an automatic buy during those months when finances are a little tight and I have to pick and choose between the four LIH releases each month.

Last night I picked up a new author to LIH. Noelle Marchand. Twenty-two year old Noelle Marchand to be exact. And I finished it in just a few hours. One sitting, which says something for this slightly ADD reader who tends to juggle six books at a time. Even though there is a scene or two that I could have done without and felt it was more a filler than anything it didn’t detract from the story and the main characters. I definitely look forward to more stories from this young author.

A few things I really like about LIH as a reader is they are affordable and they are usually quick reads, which is good for someone like me who doesn’t always have the time to read.

As a writer and a reader I’m praying they’ll pick up more Biblical Romance.  By the way, if you’re a writer and interested in targeting Love Inspired they are currently looking for new historical authors. You can even check out Seekerville’s LIH Pitch Contest here.