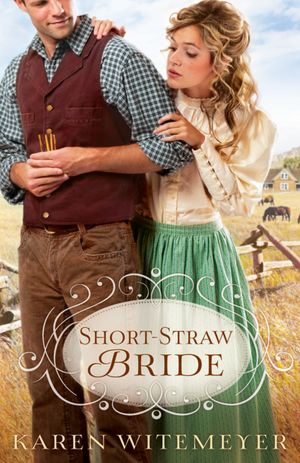 No one steps on Archer land. Not if they value their life. But when Meredith Hayes overhears a lethal plot to burn the Archer brothers off their ranch, a twelve-year-old debt compels her to take the risk.

Fourteen years of constant vigilance hardens a man. Yet when Travis Archer confronts a female trespasser with the same vivid blue eyes as the courageous young girl he once aided, he can’t bring himself to send her away. And when an act of sacrifice leaves her injured and her reputation in shreds, gratitude and guilt send him riding to her rescue once again.

Four brothers. Four straws. One bride. Despite the fact that Travis is no longer the gallant youth Meredith once dreamed about, she determines to stand by his side against the enemy that threatens them both. But will love ever be hers? Or will Travis always see her merely as a short-straw bride?

A while back I’d heard rave reviews about a book called A Tailor-Made Bride. I never got the chance to read it, but somehow got a hold of To Win Her Heart. It was then I knew Karen Witemeyer would be an automatic buy for me.

Sometimes though, authors disappoint. I’m happy to say Short-Straw Bride not only met my expectations but surpassed them. Simply put, this is one of those stories where you want to climb inside and never leave. Need I say more? I’ll be sorely disappointed if we don’t get to see more of the Archer brothers in the future.

*Bethany House Publishing provided me with a complimentary copy of this book. Her generosity has in no way shape or form, yada, yada influenced my opinion.