That following blog post is reposted from a blog I wrote for Hearts Through History on October 22, 2011

I’ve been wanting to write this post for a while but really wanted to do it justice as it speaks of a legacy of strong women during a time when it would have been too easy for the so-called weaker sex to lie back and allow men to control their surroundings.

Have you ever dug into your family ancestry? I have. I do it all the time. I find it’s a wonderful way to escape from the modern world and delve into the past. And every now and again I come across a real gem.

Allow me to introduce you to my great great great grandmother Estella Gates. She was a sheriff in Benzie County Michigan. She was, in fact, the first female sheriff in Michigan, elected in 1916 after having served as a deputy for several years under her husband, William Moore Gates. I found one article that tells a few of her feats as sheriff.

“Oh! I didn’t do so much. The people elected me sheriff. The work had to be done and I did it.”

The article goes on to say how she stopped two murderers from escaping her jail cell and “jailed the most notorious of the river rats”.

Another newspaper article, one from Oklahoma, claims this same woman was their first female sheriff as well. Eventually her and her husband moved to Texas before they returned to Michigan where she died of pneumonia at the age of 80.

I never had the pleasure of meeting her, but after speaking with second cousins who grew up under her tutelage, they say she was the sweetest and kindest lady they’d ever known. I can only imagine what it would have been like to spend my summers with Sheriff Gates.

One has to wonder what kind of woman it took to keep the peace and what kind of man stood at her side while she did it. I’ve been told the pair were very much in love. Of course, I know their lives weren’t always filled with roses as one of their sons, my great great grandfather, died a tragic death and caused a great mysterious scandal, but that’s a blog post for another day and another time as the event continues to affect those still among the living.

Here are a few pictures from one of my cousins. As you can see, the picture of William Gates is a campaign advertisement. I think he kind of looks like Kurt Russell from Tombstone.

This is the gun Estella used during her time as sheriff. I’m sure she kept it handy after her service too. I was a little suprised at its size. I figured as well as Grandma was able to keep the peace in her once boisterous jurisdiction she would have carried something a little bigger. But then I guess a bullet is a bullet when it’s well placed. 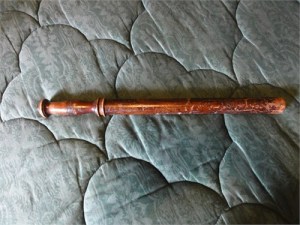 This next picture is of a nighstick, whether it belonged to her husband or to Estella nobody is real sure, but I thought you’d like to see it. Looks like it’s been well used. Maybe on a few hard skulls of all those lumberjack Estella had been known to keep under control.

By changing a few details here and there, Estella’s life would make a wonderful historical romance. Just think, a female sheriff, rough and rugged lumberjacks, river rats, murderers and a hero who looks like Kurt Russell and is confident enough in his manhood to accept her chosen occupation. Yeah, I think it’s a story I’d love to read. Do you research your ancestry? Have you ever come across really interesting tidbits?

For family members who are curious to see where Estella and William fit in out ancestry line, here it goes: